’TastyTwinsss’ is the Instagram site of non-identical twin sisters Emily and Sophie Martin, both students at Otago, who gave us several tips on how live a successful life as a student.

The twins rather neatly used notes on their cell-phones, as they put it: “to help us stay on topic”. Emily is slightly older than Sophie, but - as Sophie swiftly pointed out - she is taller than Emily! Following early years in Wellington, they moved down to Otago, where Sophie graduated in Consumer Food Science and Marketing, and is now doing a post-graduate Diploma in Marketing. Emily is now in the fourth year of Honours Psychology.
While they have done many things together over the years, they admitted to having a few disagreements, noting, however, that they have become closer as they have grown older.
The twins spoke of the strong family interest in food, about what a fine cook their mother is - and other family members also, and how food was so much associated with bringing people together. The family philosophy on food meant balanced meals and moderation in everything - not that they eat perfectly all the time, but there is a strong thread guiding their approach to food.

It was this interest in food that started the Instagram adventure, which began when they took a few pictures of Sunday brunch or coffee catchups with friends, and chose Instagram as a medium to show them. Their Instagram account has developed into much more now, - a little bit about food, including devising their own recipes, but also fitness, student life and mental health and ‘a whole lot more’.
They don’t just talk about fitness, either. Emily was not too keen on sports and athletics at school, but was persuaded to go to Les Mills by Sophie, where they had “really inspiring” instructors and they are both very keen on it now, to the extent that they have both qualified as General Fitness Instructors. This required being selected at interview first, then a substantial amount of training culminating in being flown to Auckland for the weekend to present your programme, then returning home for a certification class. Sophie is qualified to take groups in ‘Body Attack’, which is a high energy sports inspired class, while Emily instructs in ‘Body Balance’ a workout which is yoga and tai chi inspired. Sophie related how they went to their first session, then on to a 21st birthday party, and Sophie could barely walk, whereas Emily was full of energy! They can now teach at Les Mills establishments anywhere in the world.
The twins Instagram site includes some of their workouts, with a number of quick ones that can be done anywhere - and without equipment.
“We really think exercise is important for mental health.. . .It made me feel so much better. It gives you so much energy, and the endorphins are unbeatable - it’s like coffee. . . . There are so many ways to exercise, it doesn’t have to be a formal class . . . It’s so important to take a break from Uni. Go out with friends for a coffee, take a walk into town.”
Going to University is a pretty big change, “To come down to Dunedin, we literally had no idea about it.” It is a great opportunity ‘an awesome experience’. They talked about the pressures that could lead to a student wishing the week would end because you have so much on, and pressed people to ‘live in the moment, enjoy it’.
Emily told us that she had been planning to go to Auckland University, and only came down to the Open Day at Dunedin for the free trip, not at all keen on being in such a cold place. “I came down in my puffer jacket, my gloves and my hat’. Then she came across the food science course and “thought I would give it a go.”
Like so many people, Emily recalls the first few weeks of her first year as something of a strain. As well as the wrench of living away from home, “Such a big change, meeting new people, constantly on edge, and it is quite overwhelming at first.” But after a while, new friendships develop and you start to enjoy yourself.
TIPS RE HALL LIFE
“Definitely put yourself outside your comfort zone, get involved in Hall events, try new things, say hello to the person sitting next to you in lectures - obviously you have some common interests. Uni is important, but there is more to life, don’t get too caught up in your studies.
“Also, take care of yourself, get some form of exercise . . . both as a break from Uni, and for physical health. If you don’t feel like going out, here are so many other ways to have fun, eat some popcorn, watch a movie.”
Mental health is important as well - “Student Health has heaps of mental health services available, there’s always someone to talk to as well.” Emily talked about how stressed she had become in second year. Back in Hall for the second year this started really well, but during exams “I started to study above everything else . . and I lost all my energy, had such bad social anxiety, dealing with crowds like at lectures - and going to dining hall was super-tough for me.” But when she went home or the holiday she returned “so refreshed - it was like a reset.” This Emily put down to several things. There was the change of scenery and people and the chance to be alone - “it’s super-important if you are more introverted. You need the time to relax.” But also she went to a Psychologist when she was at home at her mother’s suggestion, - “it was the best thing I’ve ever done. Having someone to talk to, not judging you at all.” This experience has given her lots of tools to combat negative thoughts, such as change of scenery, breathing and meditation, a grateful journal, and so on.
Both talked about the importance of opening the conversation about mental health, something they are still working at themselves. “It is difficult to talk about. You feel vulnerable.” But the value of talking about it with friends in a way that will help them - and you - cope, is hard to overstate.
There was quite a lot more, including some great questions, but I have reached my 1,000 word target, so just a few more notes. (To have the complete experience, please try to attend these breakfasts.)
Stress relief; Try YouTube for guidance on meditation, plus there are various apps available, such as ‘Calm’.
To see Emily and Sophie’s Instagram site you obviously need the Instagram app. You can buy their E-book there for $15. It contains “nourishing recipes, some quick and easy work-outs, and ways to maintain your mental health.” Published as a PDF, it seems likely to be a useful acquisition for most if not all students, 10% of the money goes to Youthline Wellington, and it is very nicely produced. (I can say these things because I bought a copy!) 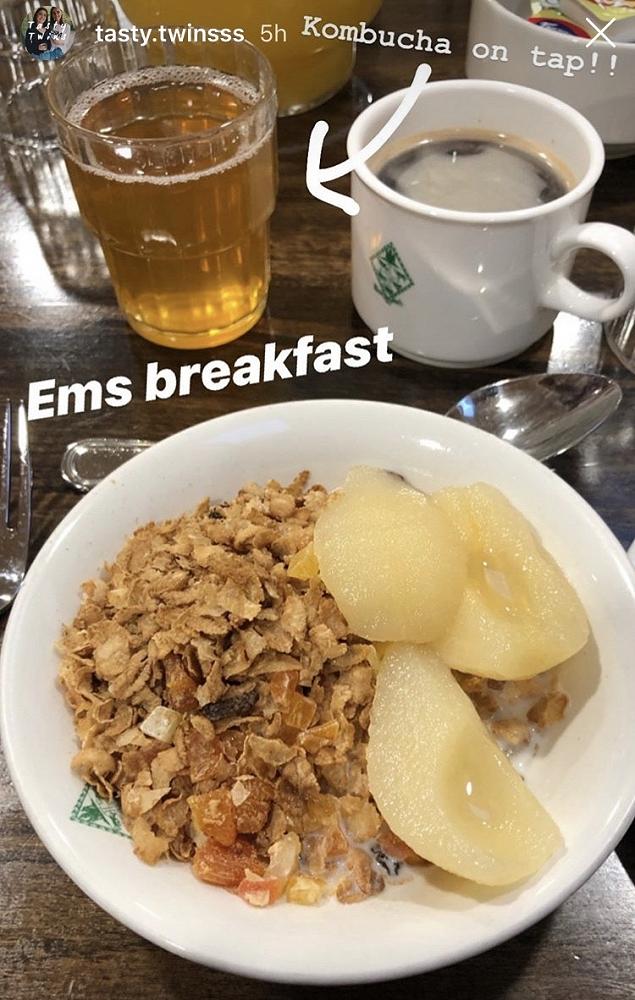