An inspiring talk on the activities of the Otago Rescue Helicopters, and of the sterling efforts of those who work to provide them with funds to bolster the Government funding and provide some very interesting medical equipment.

Vivienne Seaton is Secretary/Manager of the Otago Rescue Helicopter Trust with an impressive CV including Otago University connections. Her various past roles included Teaching Fellow in Accountancy and Business Law, and she is currently one of the Directors of Foundation Studies.

Ross Kirkpatrick is an Intensive Care Flight Paramedic. He has a BHSC in Paramedicine and Post-Grad Diploma in Health Science and 19 years of experience in the field.

Funding for the Rescue Service is partly from the Government, with the Community relied on to provide the remainder - which is where the Trust comes in. Viv paid tribute to the “absolutely stunning” hardworking volunteer Trustees, most of whom are senior business people from Dunedin providing great skills.

With responsibility for Helicopter Rescue for the whole of the lower South Island, five helicopters can be called upon. Three machines are based in Dunedin, one in Queenstown and there is an ‘on call, as available’ arrangement with an operator in Te Anau.

Ross said that the furthest North he has been “on business as usual” is Mount Cook, and the furthest South they operate in is to the sub-Antarctic islands, generally to winch people off fishing boats - although the latest mission was to rescue a dog! Apparently the dog was a trained rodent operator taken down by a Navy group to help clear rats off one of the islands. When the Navy personnel had to depart due to oncoming bad weather the dog had been spooked by a seal and run off, so the Navy asked Rescue Helicopter if they could retrieve the dog. When they landed on the island, he was sitting waiting by the helipad.

Rescuing dogs along with people is not that unusual, apparently, and Ross had another couple of stories about this, including one occasion when winching the dog up to the aircraft was the only option. After winching the patient out first they wrapped the dog in the standard rescue harness (known colloquially as a nappy), with the paramedic cuddling the dog to his chest as they were winched up together.

The furthest North Ross has been on a ‘non-business as usual mission’ was when the White Island eruption occurred. With northern-based helicopters pulled over to cover that exceptional emergency, more southerly based ones had their territory more spread out. For instance, two helicopters were moved to the top of the South Island and the machine Ross was on had one call-out to Blenheim during that period.

Over the last three years the number of missions has virtually doubled, with the trend continuing. There was a brief lull during the Covid-19 lockdown - with an interesting twist. While they expected the number of trauma-related missions to fall during lockdown, it was a surprise that the stroke, heart-attack, asthma attack and other medical emergencies also went down, presumably because when people are not working they are subject to less stress.

Each rescue helicopter needs a maintenance check every 50 hours of flying (oil change and tail rotor balance), then further cumulative checks as the hours increase on specific parts of the machine, by way of example, the main gearbox, engines, fuel tanks and rotor blades will be removed, inspected and replaced as necessary while the old component parts are sent away to be rebuilt During the largest inspection the machine is stripped right back to bare metal, thoroughly inspected, then re-assembled, which takes many weeks, if not months depending on the helicopter. So in order to have four operational helicopters at any given time there are actually six machines in the total fleet. “One engineer once described a helicopter as 10,000 moving parts rotating round an oil leak, waiting for fatigue cracks,” said Ross.

GPS Routes and The Aerodynamic Brick

Amongst other things, the Trust has helped raise funds for a network of GPS routes into Invercargill, Dunedin, Christchurch, Dunstan Hospital and other destinations, with plans for more. The pilot is obviously an essential part of the team and these GPS routes basically work as an autopilot assisting the pilot to fly in weather conditions that otherwise prevent us from flying in poor visibility and less than ideal atmospheric conditions. For example; moisture and below freezing temperatures combine to turn a helicopter into “an aerodynamic brick - and we don’t like that.” However, the GPS routes make coastal flying more feasible, so aircraft can safely fly lower and therefore below the current freezing level. These GPS routes are also owned by the service so the rescue helicopter is assured there is no other craft on the route.

The Trust has obtained funding recently for some other equipment. In introducing this topic, Ross explained that Intensive Care Flight Paramedics such as himself tend to go to the sicker patients, and “we need some ‘fancy toys’ to manage those patients”. These include a monitor defibrillator used to manage cardiac arrest. In addition to measuring the obvious vital signs, this can carry out invasive blood pressure (i.e. intra-arterial) measurements. They also have the highest specification portable ventilator available.

Another fascinating piece of equipment purchased with the help of the Trust is an Automatic CPR device, - “it’s very hard to do CPR in a helicopter, and we are transporting patients routinely who are having heart attacks. If their heart stops beating at 7,000 feet, it’s very hard to carry out CPR manually.” In answer to a question Ross described the Automatic CPR device as “brilliant - they achieve blood pressure levels that can induce consciousness, so people who are technically dead can be moving and trying to talk.” These machines are rapidly becoming more common, with the ground crews at St. John recently receiving 30 of them. Overseas services (UK, Australia) are currently undertaking trials to get the patient into hospital where a surgeon removes the clot causing the trouble while the mechanical CPR machine continues its work. The situation with cardiac arrest until now has been that you either resuscitate them on the scene, or they die on scene.

In addition to the GPS system, flight staff also have night vision goggles which make it “infinitely safer to fly at night, enhancing our ability of getting to places”. The night vision image below shows a bright spot around the centre. This is actually a cell phone, “So if you just unlock your phone and point it at the noise . . . there you go.” A cigarette lighter gives a similar highly visible bright spot. Because of these night vision goggles, the search mission durations average less time now than they used to. With Medicine being expensive, and aviation being expensive, anything that saves costs in aeromedicine is very welcome! This does, however, require direct line of sight.

Ross was very strong on anyone going tramping buying or hiring a PLB (Personal Locator Beacon). He explained that these send out a radio signal when activated that is on a wavelength to which all aircraft are automatically tuned in, and also send a GPS signal to the Rescue Co-ordination Centre in Wellington. The local Rescue Helicopter staff are then notified, and can swiftly get to the beacon and usually the person in trouble.

This almost inevitably led to one of the very large store of anecdotes, this one an old lifeboat at sea. As corrosion took a grip, the beacon was set off, triggering a search for what turned out to be an old, abandoned life raft. Apparently it is not uncommon for this kind of expensive and time wasting search to be set off by someone throwing a beacon away, which then gets activated as it deteriorates. The proper way to dispose of them is to send an unwanted beacon to the Police or the manufacturer - or cut it in half and rip the battery out.

The lower South Island group is the largest rescue group in the country. It is the only one with more than three aircraft at a base, covers over a quarter of the land mass which includes some of the most difficult terrain, and only has 6% of the population. Taking someone from Invercargill to Christchurch takes around four to six hours of operator time. As to why this might be needed, Ross alluded to the problem of only having one Neurosurgeon in Dunedin, and that certain more advanced procedures are done in Christchurch, such as someone having a stroke involving a large clot: “There’s a thing called clot retrieval, where they (neurosurgeons) will basically stick a thing like a corkscrew into the clot in the brain, and pop it out. - It’s much more technical than that! . . . . .When that clot is removed, and blood flow is restored to the brain, that person (hopefully) becomes normal.”

Another fascinating Expert breakfast talk, of which this is just a taste! 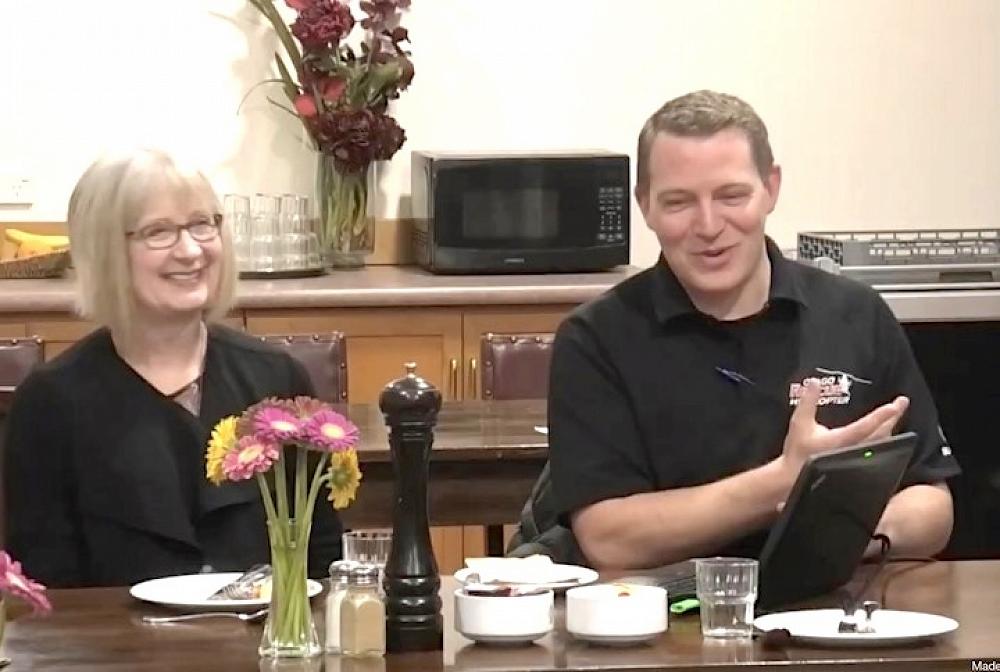