A powerful reminder of the importance of the NZ Defence Force to this country, and the demands placed on the young people in it to possess the necessary diplomacy, discipline, humanity and courage needed to place themselves in dangerous, sensitive, sometimes life-threatening, situations.

Alex began by noting that he is a second-year medical student, married with a young son, and lives in Dunedin having grown up in Christchurch. A common question he is asked is why, at the age of 33, with a pregnant wife and at the height of a successful career, would he give it up to pursue medicine? He touched on that question a number of times in his talk.

Alex outlined two ‘formative’ experiences’ he had when growing up. One was his selection for the New Zealand team to play in the under-14 World Rugby Cup. This was held in France, and the two weeks he spent there, sampling French culture, had a number of effects, perhaps paramount being an enhanced appreciation of what New Zealand offers its citizens, “and what a great country this is.” This experience also led him to sample and understand the local culture when travelling, a theme he echoed throughout his talk.

At that stage of his life his great ambition was to be a doctor, with a 15 year old’s vision of “all my time stuck in an operating theatre”, though he had reservations about never being outside! His second formative experience concerned conversations with his grandfather, who role-modelled being a good man in society, as well as talking about his Second World War experiences in which he lost his left leg below the knee at the brutal battle of Monte Cassino. But his grandfather also talked about the comradeship and of being part of something greater than oneself in service to one’s country.

After a short ‘side-trip’ studying music (Jazz) in Christchurch for a year, discovering that was not what he wanted, Alex enlisted in the New Zealand Army as a trainee officer. He described boarding the plane for Waiouru at 6.45 am on January 1st 2006 with, amongst other things, an iron and ironing board, this being an Army requirement. During that year of officer training, 190 days was spent ‘in the field’ in blocks of about 16 days , which involved carrying a pack of around 40 Kg., sometimes in a temperature of -10℃. - “A tough but excellent year.”

During that year they went to Brunei, leaving Waiouru by bus in a temperature of -5℃(Where it was snowing) and on to Brunei where the temperature was 35℃, with high humidity and “very noisy”. At night the animals and birds in the jungle all seemed to wake up and the noise made sleeping “quite challenging, but quite enjoyable, as well.”

“You don’t live in the jungle, you survive in the jungle, where everything there is trying to kill you.” Apart from the obvious such as tarantulas, scorpions and venomous snakes, a simple cut could easily become dangerously infected. “The most deadly thing in the jungle was the centipede which, as it walked, secreted a toxin out of its feet, and if it touched you you’d be dead within minutes.”

As well as learning to survive in the jungle, the 60 or so members of the contingent also had to learn how to effectively soldier in that environment. They worked with some “great, great people in the Brunei Defence Force”, and also had the opportunity to go to the capital, experience Islamic culture, and visit the poorer areas, all helping him to gain perspective to life in general. There is a distinct difference between being fit and being ‘military’ fit, which Alex had to attain during his training. The whole thing was a transformational event, “It really highlighted to me that you can overcome adversity if you’re hungry for it.” - If you keep focussed on the objective you want to attain, you can get through.

Three years later Alex had his first operational deployment. “I want you to imagine you are on a street, You’ve been put in something restricts your vision. You feel like you’re breathing through a straw. You’re wearing full ‘battle-rattle’ . . . which includes uniform, body armour, boots, rifle, pistol, a baton and a shield. Your skin is stinging from the tear-gas clouds hanging around you, and you’re facing 300-plus angry locals with machetes, batons, sticks, rocks, and anything else they can take up.” At 23 years of age, Alex’s job was to command the soldiers who had to face that mob. This was in East Timor, just out of around 500 years of Portuguese colonial rule, and about 25 years of war it had fought with Indonesia, and at this time immersed in a civil war. In the event of a riot, the local police would respond, and if they were unable to restore peace, the United Nations police (with a large proportion of not highly disciplined Portuguese) stepped in. If they also failed, the last option were the NZ and Australian Defence Forces. Techniques ranged from crowd dispersal with tear gas, through to firearms. In all of this maelstrom, with themselves and the people under their command at risk of injury - or worse - officers needed to keep in mind the big political picture, the need to keep New Zealands reputation sound while bringing peace to the locality.

The 30 people in Alex’s platoon were housed in a two story villa in the middle of a suburb. With their food being delivered from the base, the platoon used some of it to feed the local children, organising a barbecue in the evening for the same purpose, playing football and volleyball and having a great time with the children.

After about two months there, the platoon’s mattresses were due for changing, and they left the old ones out for collection. Overnight, with the local people well aware that they had been left out for disposal, most of the mattresses disappeared. This created a dilemma, because the troops were under a mandate to maintain a professional distance from the population, while at the same time they wanted to maintain the trust of those same people. It was also necessary to make the point that it was not OK for the locals to steal from the platoon. Alex, as Commander of the unit, decided to take the line that the children could no longer come into the villa until all the mattresses were returned. The locals did not like it, feeling it was unfair and unjust. For one thing, it was the main source of decent nutrition for the children. But it worked. The mattresses were all returned within 2 days, the children went back, and the dialogue with the local community was re-established. This was just one of several such dilemmas Alex faced.

There were several highlights too, in addition to interacting with those children. He was invited to a local wedding, as commander of the troops looking after that sector, an interesting affair in which the highlight was perhaps the bride wearing a huge ‘Princess’ dress, “that Disney would have been proud of!”. There were opportunities to train with both the Australians and the US Marines.

This latter was of some geopolitical importance, being the first time NZ soldiers had trained with the US Military since the break-up of the Anzus Treaty in 1986. The Australians had 3 Black Hawk helicopters, and Alex clearly enjoyed the experience of hanging outside one as it “blasted down the valley, about 10 or 20 feet above the top of the trees.” Alex also undertook a 5-day combat life-savers course, which gelled with his earlier thoughts of studying medicine.

His initial expertise was in logistics, and when he returned to New Zealand, he found himself responsible for around 204 million dollars worth of military equipment in an infantry unit to which he was posted. The contrast between this and his earlier combat role was substantial, and after 2 years of it, he applied for a transfer. He also went on a 2 month promotional course “and did quite well in that” - he came first against some stiff competition. Shortly after the course, and at the start of a weeks leave, Alex was ordered to work late one Sunday night. It was August 12, 2012 and it was because on August 12 2012 Corporal Luke Tamatea, Lance Corporal Jacinda Baker and Private Richard Harris were killed in Afghanistan by a roadside bomb.

[The Youtube video of the arrival of their bodies in Christchurch, with the accompanying highly emotional Haka, has been viewed over a quarter of a million times - Ed]. When such a thing happens, the Defence Force pulls out all the stops to assist the family and others affected. Alex’s job in this case was to act as liaison, not just between the Defence Force and the families, but between the families and the Defence Force. It includes repatriation of the bodies, the funeral, memorial services and so on. Support of the family continues for around 10 days, and is very important in the way the families experience their grief. It was a steep learning curve for Alex, whose Scottish ancestry meant he had little experience of the Maori world. “It was a very charged time. I was getting about 3 hours sleep a night.” He remains in touch with that family 11 years later.

However, the pressure of this event, together with that of being responsible for 204 million dollars worth of equipment took its toll. “I reached the point where I just stopped functioning, and I just had to take a break. . . .” After about 3 months of counselling for this burn-out, Alex found he had a new confidence, and a better idea of who he is. “If you ever have to experience something like that, take it for what it is, and appreciate that it will strengthen you and make you a better person.”

Alex left the Army at that point and started with St. John’s Ambulance, initially as a volunteer while completing the qualification BHSc(Paramedicine) needed, then began full time work. Among his experiences there, he was surprised by how many suicide attempts for which they were called out, has assisted in the births of two babies, and discussed some of the other cases he has encountered.

“I have seen a lot of death. And you come to understand that death is a natural part of life. It’s very intimate being involved with someone as they take their final breath.”

Just summarising some of the other things Captain McDonald covered, he described:

Alex also offered some pieces of advice gained from is own life experience:

(There was also a good deal Captain McDonald did not cover, including his involvement with the Christchurch earthquake response, two Arctic circle trips, and his being President of a non-profit organisation, ‘Tactical Medicine New Zealand’, which has the stated aims of: “Using our experiences as first responders, military medics and medical specialists, we will work with existing organisations across the spectrum of casualty care to improve capability to save lives. Through research, professional development, competition and strategic engagement we will improve the chain of survival to decrease morbidity and mortality from critical incidents.”) 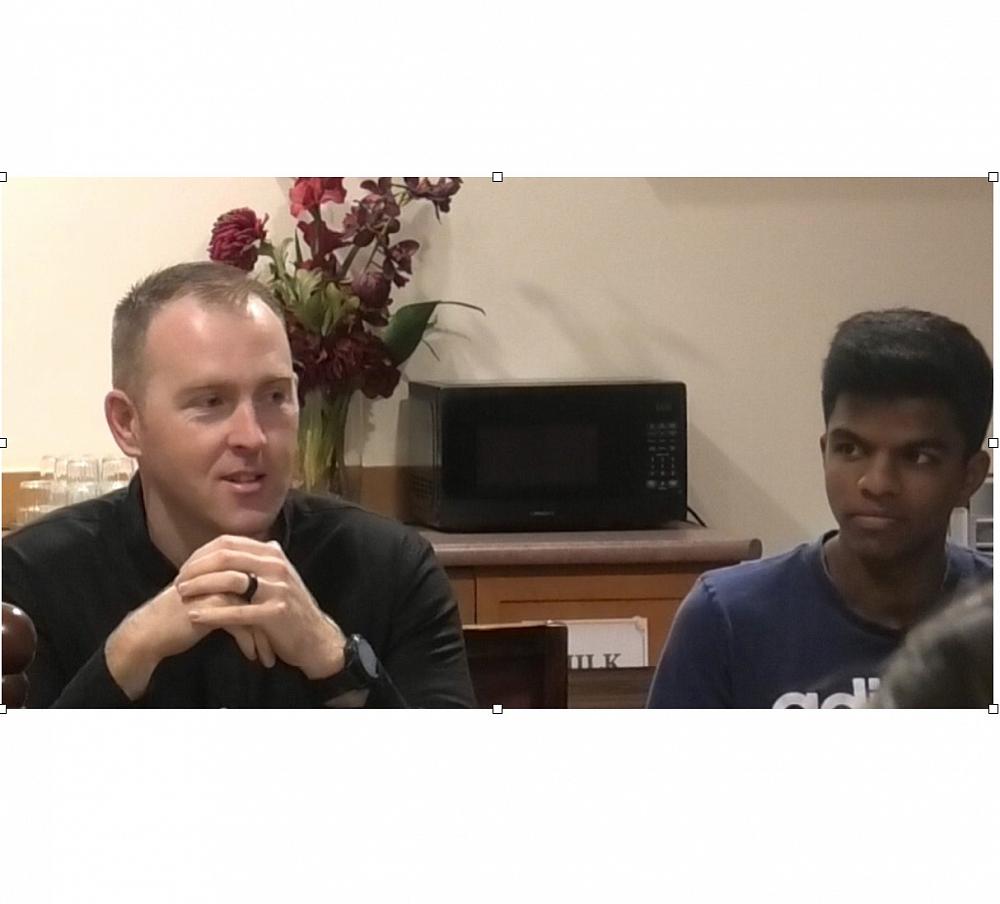 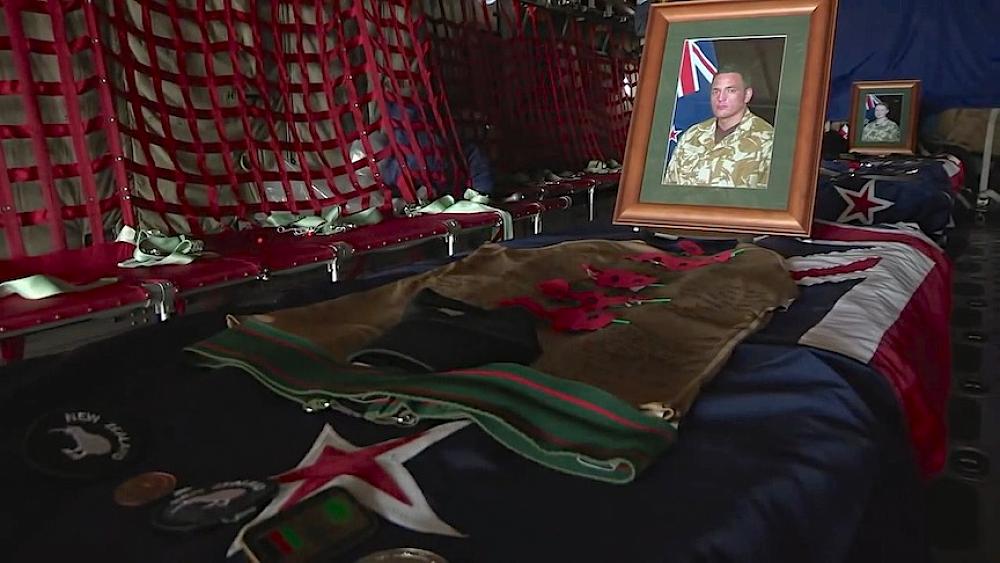 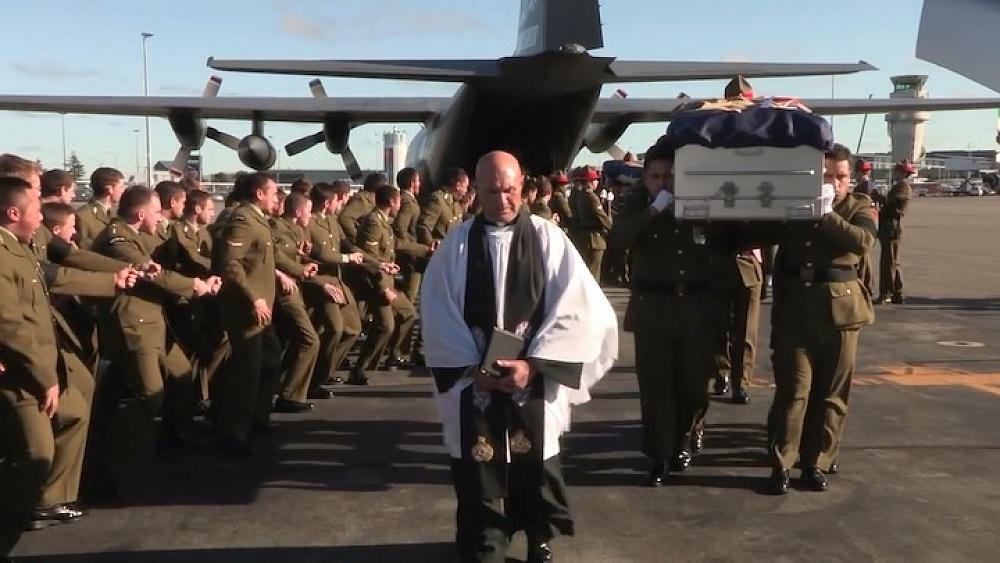