Prof Bilkey described the somewhat circuitous route by which he arrived at this present position, then discussed memory, schizophrenia, Kanye West, and a number of other interesting phenomena.

Professor Bilkey grew up in Kerikeri the largest town in Northland, though in his childhood it was a much smaller place. The high school there had no 7th form (year 13) when David was there, and there were only 15 students in year 12 - though 3 of those went on to obtain PhDs, two now working in universities and the other at NIWA. In those days when far fewer people went to university, this would have been unusual.

Having finished school at year 12, uncertain about what he wanted to do and with no-one in the immediate family who had been to university, David decided to make use of his manual dexterity, and went to polytechnic in Auckland to study engineering. "But I did not really engage with it" and moved to teacher training, influenced by the fact that his mother was a teacher. After qualifying, he taught at a primary school for two years. Although he enjoyed doing that, he did not feel intellectually stretched by it. “I met someone who drew me down to Otago” - and this led on to him studying computer science and psychology at the University of Otago as a double major. David found this far more satisfying than what he had done before.

Things Will Work Out

In the third year of his degree a new Head of Department from Canada started and he was very strong on Neuroscience in relation to Psychology - an emphasis that remains in the Department to this day. David went on to an Honours degree, and was encouraged by the new Head to go on to a PhD, which led on to where he is now. Prof Bilkey used these early experiences to point out that, “If you’re not sure how things are going to pan out, don’t worry too much . . . if you find something you really enjoy, and continue working well at it, things will work out.”

His PhD, undertaken at Otago, was ‘quite esoteric’, studying the circuitry between different parts of the brain and trying to work out how they interacted with each other, particularly in regard to memory. On finishing his PhD, he felt it was important to get down to the cellular level of the brain and try to see how neurones were working. The upshot of this was a post-doc position for a year in Seattle, in the States, with someone interested in epilepsy who worked on single cells. This was very fine work using microelectrodes inserted into single cells to measure electric potentials, and then see how this changed in epilepsy models.

He then successfully applied for a position in the Psychology Department at Otago, and has been here since. From Otago he obtained a von Humboldt scholarship*, “a fantastic scholarship" supported by the German Government and enabling many hundreds of researchers from all over the world to spend up to two years in Germany. They can work in any German establishment willing to sponsor them, in any discipline, doing work in which the post-doc is interested. There is opportunity for a great deal of mutually useful ‘networking’, and one “feels part of a big family”, with regular arranged ‘get togethers’ in Germany. Prof Bilkey noted that he "could have been better" at networking, and looking back sees how important that can be, encouraging those present to keep this in mind - starting with St Margaret’s.

Back in Otago, David became very interested in the way memory works, focussing on the hippocampus in the temporal lobe, trying to understand how it works. He concentrated especially on how individual neurons connect, how these connections change, “and how that can underly memory. . . When you learn something, there is a physical change in your brain” so that in the future you can recall that piece of information - “and the fascinating question is, how does that work?” “I think I’ve been reasonably successful at that, and a lot of that success has been through the people I have worked with . . fantastic students doing PhDs with me . . “

Over the last 10 years he has begun to relate this work to schizophrenia, a debilitating condition for sufferers and those around them, that affects about 1% of the population. It is characterised by hallucinations such as believing they are some famous person, hearing voices that seem totally real instructing them to do strange things, leading to strange behaviour. There are physical changes in the brain of someone suffering from this disease. The widespread advent of antipsychotic drugs over 40 years ago at least suppressed the psychotic symptoms, though without affecting other symptoms, such as the cognitive ones - being unable to make decisions makes it difficult to obtain employment. Despite the desperate need for better therapeutics, many drug companies are reluctant to spend the enormous amounts of money needed in developing new drugs, compounded by finding promising candidates that don’t make it through the process. As a result, no really effective drugs have emerged that relieve these other symptoms, such as those arising from cognitive disturbance.

Part of the reason for the failure in drug development is that we do not know exactly what has gone wrong in the brain of someone with schizophrenia, and if we could, there would be a much better chance of finding drugs that would target the problem.

“When you are experiencing the world, it comes to you in an ordered sequence, and clearly the brain has the ability to remember these sequences. If the mechanisms that allow this are disturbed in some way, the world doesn’t make sense anymore.

Kanye West is an American rapper, producer, and fashion designer who is also running for US President and has exhibited unusual behaviour on a number of occasions. Responding to a question about West, Prof Bilkey noted that, while he is generally thought to have bipolar disorder, there is some relationship between that disorder and schizophrenia. He went on to discuss the ‘two-hit' model of schizophrenia. The ‘wiring’ in the brain is undergoing considerable change during development in utero, and this model holds that an event such as maternal illness during this period, or a difficult birth, can disrupt this brain development and constitute a risk factor to future development of schizophrenia. That in itself may not be enough to trigger the condition, but there is another period of massive changes to brain connections in adolescence, and some major stressful event, or a chemical intervention such as ‘smoking too much weed’ at this time might change the wiring again and push a person over into schizophrenia. As Kanye seems to put himself in pretty stressful situations, it is possible that this has happened to him.

Asked about schizophrenia in older people, Prof Bilkey noted that the peak age for schizophrenia development is around 25 to 30 years, though dementia may occur in older people - a quite different disorder causally - it might appear to be similar, with delusions and hallucinations for example.

Again responding to a question, this time on research informing teaching, David said that, especially at 200 level, “I always try and bring in some recent research . . and continually update those lectures . . . definitely being in touch with the research really helps - and sometimes completely changes the focus on a particular area . . “

In response to a question Prof Bilkey pointed out that, in his Department, they only take about 10 people per year to be trained as Clinical Psychologists out of perhaps 60 or 70 good applicants. The problem is not one of demand, which is substantial as recognised by the Government, but that each student must spend time being supervised in a training programme with a practising Psychologist, and there are only a limited number available to do this.

As usual, I have not been able to include everything. It is well worth attending if you can!

Just one more comment Prof Bilkey made, in response to another question:” Once you have studied psychology, you do look at the world a little bit differently in terms of social interactions and so on. . . . If I was going back and doing my degree again, I would do more social psychology.”

*von Humboldt Scholarships: Click on this link to find out more: 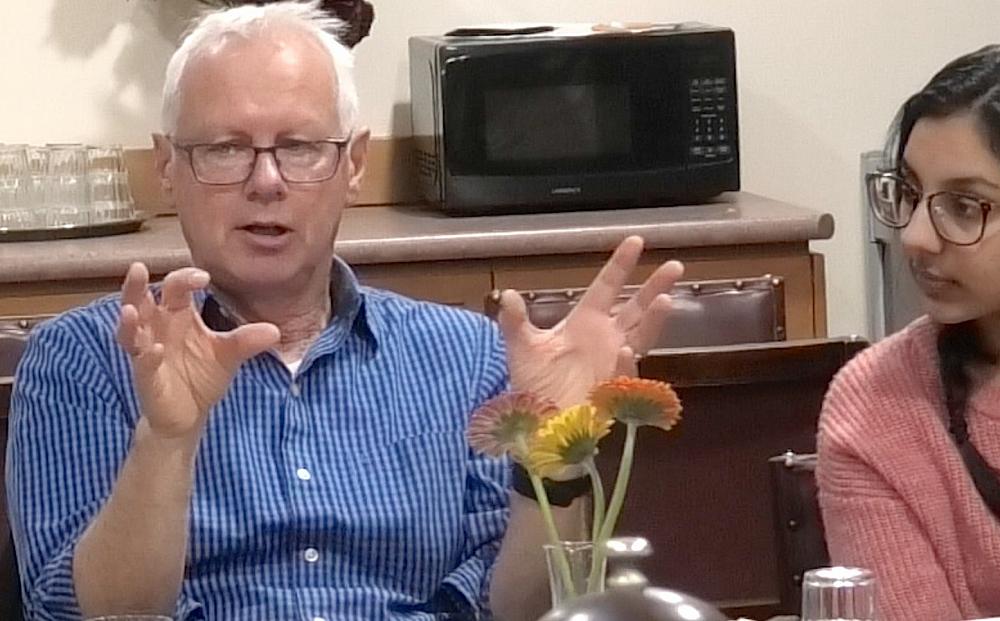