A fascinating talk covering a wide range of topics, including Covid-19, a glimpse into the inner workings of Government, internships, genetic modification, prejudices, climate change, fluoridation, values in science, et al. and punctuated throughout with dry flashes of humour.

An ex-graduate of Otago University, George Slim “rocked up to Arana (Hall)” in 1979, and went on to complete a PhD following his Honours Chemistry degree. From there, in 1987, to a post-doc in Chemistry at Cambridge University, “so this environment [the St Margaret’s Atrium] is reasonably familiar.” He was a tutor at Sidney Sussex College, from which Oliver Cromwell had graduated. There was a picture of Cromwell in the dining hall, and every meal began with a toast to the Queen! So that Cromwell would not ‘witness’ this pro-Royalist activity, they had a small curtain to draw over his portrait until the toast was completed - an aspect of the British sense of humour.

Returning to New Zealand, George worked at the CRI Industrial Research Ltd, for around 11 years, “then got a bit restless about the fact that no-one believes a scientist knows anything about commercialisation.” So from there he joined New Zealand Trade and Enterprise (NZTE), whose brief as a government agency is to help businesses grow internationally. Dr Slim’s thinking at this point was that he would learn a lot about industry, then go back and help commercialise science. However, he was asked to help run their new Biotechnology strategy, which he did for the next 6 years.

Following another Government restructure, he moved from that into consulting, which he has now been doing for 10 years. His clients include this University, as well as those of Auckland and Wellington, Science New Zealand, and the Office of the Prime Minister’s Chief Science Advisor. The Chief Advisor, Prof. Dame Juliet Gerrard is based in Auckland, while Dr Slim, Senior Advisor to Dame Juliet, is based in Wellington. His wide range of contacts is very significant in his work. “So I spend a lot of my time either finding people who are threatening to behave badly, and asking them to stop, or finding people who we hope to encourage to do something and trying to give more power to their elbow.”

Relatively new to New Zealand, though well established in some other countries, this was set up at the beginning of the John Key Government, with Sir Peter Gluckman being the first Chief Science Advisor. The present Chief Advisor, Dame Juliet, is a Biochemist with a First Class Honours degree and DPhil, both at Oxford University - she is originally from Nottingham, England.

Still nominally part-employed by Auckland University for 20% of her time, she is called upon by the Prime Minister when independent advice on scientific matters is required by herself or one of her Ministers. Dame Juliet is also involved in promoting science, talking to people, including the Press, about how science can help them, and generally trying to promote engagement with science at all levels. That includes working on breaking down the traditional image of scientists as elderly white males, “Which obviously suits me!” and introducing diversity into science: “As soon as you start to exclude people, you are losing a resource.”

The structure consists of a fairly small central office in Auckland headed by Dame Juliet, with three researchers, Rachel, Celia and Ellen, who “do the bulk of the writing and the actual hard work, the research. . . . . There’s me chatting to people in Wellington, trying to see where the next thing is coming from that may need our attention.” Dr Susie Meade is Principal Advisor and runs the Science Advisors network (DSA) that operates across Government departments. These are part of a much wider reference group of people who contribute their particular expertise when called upon. There are DSA’s in all the major ministries, including Education, Business Science and Innovation, Health, Justice, etc.

If people have a scientific concern,

- they can approach us, and say, “Look, the Government’s running down a wrong area.” 5G is a popular one: “‘The Government is poisoning all of us!’ And we say, Well, not really. The evidence is no longer there.” While Dr Slim quite enjoys engaging with these people, and handles ‘quite a lot’ of them, he also noted how committed and serious they are about their subject, and talked a little about the anti-fluoridation of tap water, to which many are opposed, on the grounds that it is bad for the population. They propose, for example, that the use of fluoride tablets or fluoride toothpaste is a much better approach. And they come armed with evidence. It is true that we are still learning about fluoride. In high concentration, it is now known that it can interfere with iodine absorption, but there is no evidence for this occurring at the much lower dose used to greatly reduce the incidence of dental caries. As with so many things in life, there is a balance to be struck. “Teeth issues will dog you for the rest of your life. If your teeth rot as a teenager, it is very hard to come back from that. You are in severe pain and cannot sleep.” Other - serious - issues people approach PMCSA staff about include climate change and nitrate levels, “where there are obvious failings that need to be addressed.

- is another important aspect of their work, and there is a network of scientific advisors across the world, started by, and still headed by, Sir Peter Gluckman.

Overall, the PMSCA is intended to be a bridge, a meeting point for scientists, Government and society, where she [Dame Juliet] can be approached . . . if the Prime Minister needs to find science, she can find science; if the scientists need to find the Prime Minister, they can do so. And the point is, it is trusted and accessible.” It also aims to be inclusive, rigorous, and transparent. The major challenge is to provide advice on a useful timescale.

George addressed what he described as “the key slide in this presentation, saying, “If you don’t remember anything else, the line in bold is the one to remember, because if you ever get involved in providing advice to Government, you have to remember this. Science is never the only factor in consideration, and very rarely the most important. And people rock up and bang the table and say ‘You have to do this!” - and that will get you ignored.” Science is of substantial significance in certain spheres, such as climate change, Covid-19, etc. but in other situations, science is not the biggest consideration. “People’s lives are at stake and bureaucrats understand that, and they will ignore you” in such instances.

Genetic modification (GM) is another area that many people regard as unsafe, “it’s not - you can see what’s happened and it’s getting more and more precise, so the safety issues are not the point. The point is that people do not like GM, that you can get in there and ‘fiddle’ with something so fundamental.”

Science is not about values, it is about whether something works or not. “Science is very good at saying there is a problem. “If you do this, this will happen. You have to leave it to the politicians to say what is to be done about it. Science really struggles with timely and definitive answers. Climate change is probably the classic one. We have known probably since the mid-1800’s that climate change is on its way.“ - It was shown that carbon dioxide warms the atmosphere and that human activity was producing more of that CO2. But the Swedish scientist Svante Arrhenius [S Arrhenius, Nord. Tidsk. 14. 121 (1896)], one of the key workers in this, calculated fossil fuel burning would take 3,000 years to double the CO2 in the atmosphere, and thought that the global warming would be beneficial. “If science had said ‘this will definitely happen’, we could all go ‘Right, we have to do something about it. But science has been saying, well it could be this, could be that’ and so a whole lot of vested interests have piled in to naysay it. So it ’s down to the politicians to decide what has to be done.”

Prejudices - We All Have Them

Dr. Slim covered a number of other topics including plastics, commercial fisheries, commenting on how little we know about our oceans, etc., but from this point I will confine myself to two which I feel may be of particular interest, Covid-19 and PMCSA internships.

The PMCSA “had been interested in this thing that was coming out of Wuhan . . . the reports coming out of Wuhan looked like trouble. . . . The people who actually run the country is the Department of the Prime Minister and Cabinet, where there is little knowledge of science.” The problem was just that. The decision makers knew little about viruses - such things as coronaviruses having lower mutation rates than other viruses, for example. The PMCSA were being asked a lot of rapid-fire questions by several such people “who were making big decisions, decisions that would literally cost billions of dollars, on a very, very low evidence base - and a high level of personal uncertainty.”

There was a “mad scramble” in the PMCSA office, with various experts being contacted, huge influx of information, texts in the middle of the night.

This graph, which was instrumental in persuading the government to take the steps to contain Covid-19 - including lock-down - was presented to the Prime Minister by Dame Julet. It shows the rapid increase in cases in countries which failed to take action, compared to such places as Taiwan and Singapore. Having the Chief Science Advisor in a position to co-ordinate all this was crucial.

Vaccination is no less crucial - and a battleground of a whole lot of different interests and prejudices, political, financial and ill-informed. The rare and easily dealt with side-effects have been blown out of all proportion by some groups. Even the heart inflammation side effect is seen at a rate of only 67 per million doses given. The risk of complications - including death - are much higher if you contract the disease, and anyone over 12 years of age is being advised to have the vaccine. [For more on this:[https://www.msn.com/en-us/health/medical/3-experts-on-why-young-healthy-people-should-get-a-covid-19-vaccine/ar-AAN1jL8]

Regarding the ‘rollout’ of vaccination, Dr Slim pointed out that the Health Service is already very busy looking after New Zealanders ill from other causes, there have been delays in vaccine supply, which turned out to be quite difficult to produce, etc. “It is a devastatingly complex problem, and easy to come out, even from my position, with a glib answer.”

Internships at the PMCSA

If you can obtain funding to support you, three-month interns at the PMCSA are available. Universities may fund these, as does the MacDiarmid Institute: [https://www.macdiarmid.ac.nz].

Apply to the office - “We don’t mind what they do, so long as it is interesting and fun!” - There is a list of the current projects in the figure below.

For more comprehensive and up-to-date information on the PMCSA, see 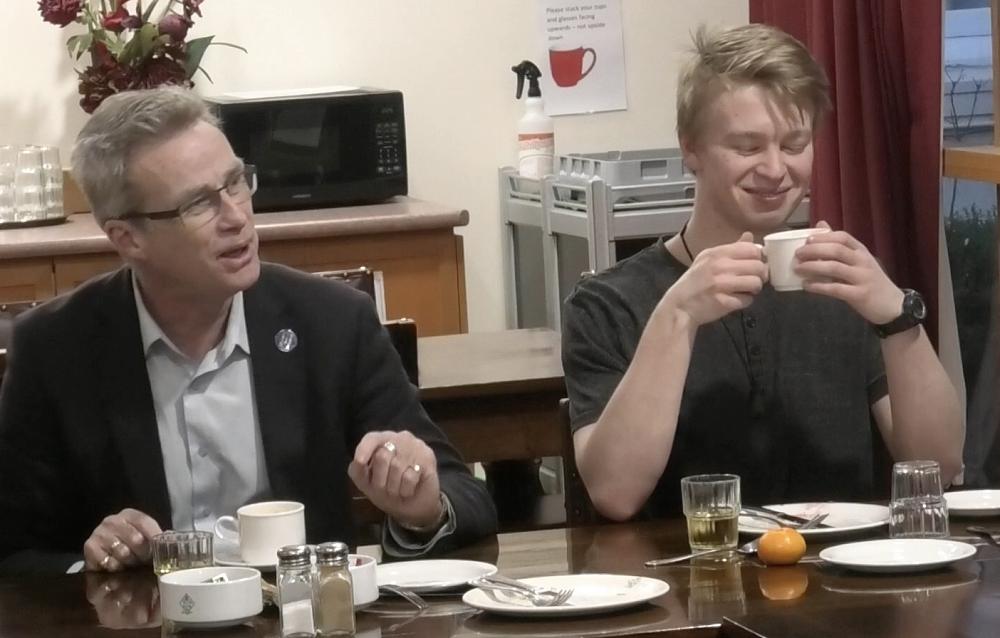