Dr Erickson treated us to another outstanding talk in what has so far been a series of excellent Wednesday morning sessions this semester, with an insight into his cardiac research, his Health Science teaching and some very useful tips on how to get the best out of one's time at University.

How Dr Erickson Came to Otago

In one of the best-attended sessions I have seen in 17 years, Dr Erickson began by giving similar information to that offered by each attendee - that he comes from the US, and is a Physiologist. He came to Dunedin in 2013, “and loved basically every second of it”.

In the US, professional courses such as Dentistry and Medicine are generally post-graduate courses. This is the case at Florida State University, where Jeff was an undergraduate, wondering which direction to go in - Medicine or a PhD. So in the last two years of his first degree, he volunteered to work in an Emergency Room at a hospital, and another job working in a scientific field in an environmental laboratory. This experience pushed him in the direction of research: “I really enjoyed the fact that I felt I was doing something new every day” - coupled to some reservations he developed about some aspects of the way the Medical system operated in the United States.

After completing a PhD at Florida State, he did post-docs in Iowa and California. As part of his work in Iowa he undertook “an exchange programme” at Utrecht in the Netherlands. There he taught cardiovascular physiology and learnt mass spectrometry. This changed his perspectives somewhat and made him realise, “Not only can I do science, but I can do it outside the US.”

Later at a conference he met a friend of his from Otago Physiology, Pete Jones, who suggested he apply for a post currently being advertised at Otago. “Worst case scenario, you’ll get a free trip to New Zealand”. Jeff was offered the job, and has been here since.

The rest of the session involved answering questions from College Members. First he talked about his research. While he explained that he loved teaching and protected the time he devotes to that, most of his time is taken up by research - which also involves teaching postgraduates and honours students, of course. Jeff’s particular interest is in developing new therapies for clinical use, by studying the pathways that lead to heart failure then researching ways of modulating those pathways.

For him, the best example is in diabetic myocardial problems. Diabetes is on the rise across the world, and two-thirds of those suffering from it die of cardiovascular disease (CVD). The diabetes-associated CVD occurs through different pathways to that seen in non-diabetics. Despite this, diabetics with CVD currently receive the same treatment as non-diabetic CVD patients. In addition to animal models of CVD in diabetes, his lab also works on cardiac tissues removed in cardiac surgery which are normally discarded, but, given the patient’s consent, provide useful experimental material. Most patients do consent, and new drugs, for example, are tested on this tissue to see if processes going on within it can be modified.

How to Survive - and Progress - in Science

In answer to another question, Jeff said: “Science is a long series of many setbacks and successes. You actually have more of the setbacks than the successes . . . It really helps to have a personality where you have great curiosity and can accept failures.” More experimental ideas fail than succeed. Papers may be rejected a number of times requiring improvements. Grant applications often get rejected, but some make it through. “You have to be driven by the love of the game, the joy of doing the science and interacting with the people and watching them develop as scientists and helping that process along, rather than concentrating on every success and failure.”

Jeff told us he has had three relatives die of some cardiovascular complication, which drove him to thinking, “Why does that happen?” CVD is still the biggest killer of people in the developed world. A great deal of money has been put into research into this, and progress has certainly been made, but there is still a large proportion of patients for whom there is no solution.

Dr. Erickson and The President

Asked (by a member who has spent some time in Iowa) if he had gone on the Netherlands exchange because Iowa was too boring, Jeff said that, while Iowa might not be the most exciting place in the world, it had been a great opportunity for him. It gave him the opportunity to work with the Head of Medicine of a very prestigious place. Indeed, his mentor at University of Iowa, Mark Anderson, is currently head of Medicine at Johns Hopkins, one of the world’s top medical centres. Also, one of the most exciting things that has happened to Jeff in his lifetime happened in Iowa. Iowa is the first State to vote in primaries and the Presidential election. Senator Barack Obama, as he then was, went to Iowa to discuss Medical Research with the lab group in which Jeff worked. That same day, he announced in a major speech outside the lab that he was running for the Presidency, also announcing his major platform of reforming health care in the US. “The very first piece of campaign literature for his Presidency is a picture of him walking through our laboratory hallways with our lab group.”

“Was there ever a point in your career when you thought, ‘I’ve made it.’?” came the next question. Dr. Erickson said that, like most other people his career was a “steady build” . “This helps with the ups and downs - I tend to be thinking more that here are the things I would like to accomplish in the short, medium and long terms. So I never think to myself ‘that was the one big thing that I wanted to do.’ . . . . Each step has made me think ‘Well, what’s the next thing that I need to do. - But if it happens, I’ll let you know!"

In answer to a question for further information on therapies his group might be developing, Jeff talked about the kinase CaMKII (‘Kam kay two’) ‘the protein I’m best known for (which you’ll get to know all about at 300 level) is a protein called CaMKII . . a kinase that is spread throughout the body, but lots of it in the heart”. He went on to explain this with the help of what he described as a ‘nerdy’ metaphor - that CaMKII is like a spaceship’s hyperdrive working with the main engine when extra power is needed - or perceived by the body to be needed. CaMKII’s job is to make everything go faster, but, if this continues for too long in the case of the heart, it causes cells to die and arrhythmias to occur . “What we’ve learned is that, for a person who is diabetic, or is going into heart failure, CaMKII becomes persistently active. It ‘believes’ this is an emergency situation, and is actually pushing the heart all the time.” His group is working on therapies that block CaMKII from being activated in such circumstances, damping down it’s activity, and so preventing cardiac damage. In the Erickson laboratory, animal models have shown this to be a viable approach, and drugs have been and are being developed that exert this damping effect.

How Does One Get into Research?

Most students at Otago undertake Honours, and it is in the 4th year that they are gently introduced into research. A student picks a supervisor and a project, is shown how to do the project work. After several weeks of working on the project each week, the student writes a small thesis, which is then marked. When people find this small research project satisfying, they can go on to a Master's degree or a PhD, quite often starting out as a Master's student and converting to a PhD part way through - not necessarily in the same lab. Otherwise, having an Honours degree is still of benefit when looking for a different kind of position. A PhD at Otago is generally completed in three years.

Dr. Erickson made two comments straight away: “This is something we care about a lot” and “It’s advice that a lot of my Health Science students won’t take, because they put so much pressure on themselves.” About two years ago the content of First Year Health Science was deliberately reduced by 20-25% in an effort to lower the stress on students. “and we thought, ‘The students will be so much happier’”. But that has not turned out to be the case, primarily because people are - rightly - aiming high and so putting pressure on themselves. It is important to have a balance between working hard and relaxing. Both are important, and complementary. If you are enjoying things that you do, your learning will also be better. 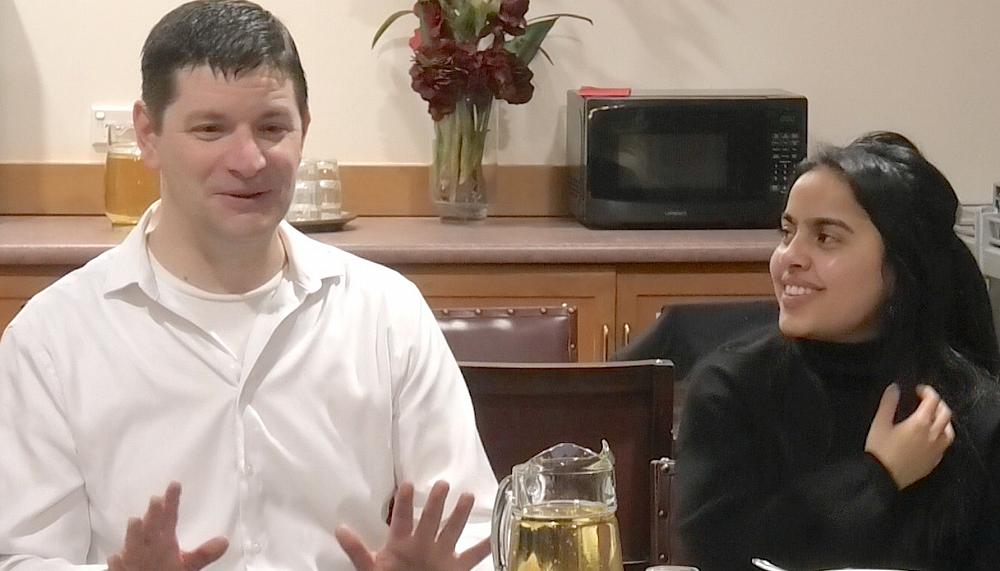